Greg Belote on Mar 26 2014
All-around lover of software and startups. Big fan of JFDI and getting stuff done. Wefunder Staff

What if Oculus Crowdfunded for Equity? 145x Return.

On August 31st, 2012 Oculus closed a successful Kickstarter campaign raising $2.4 million to develop their VR headset. Yesterday they announced a sale to Facebook for $2B. Let's play the "What If" game and pretend their 9522 backers were investors – how much would their investments be worth today? Probably about 145x. 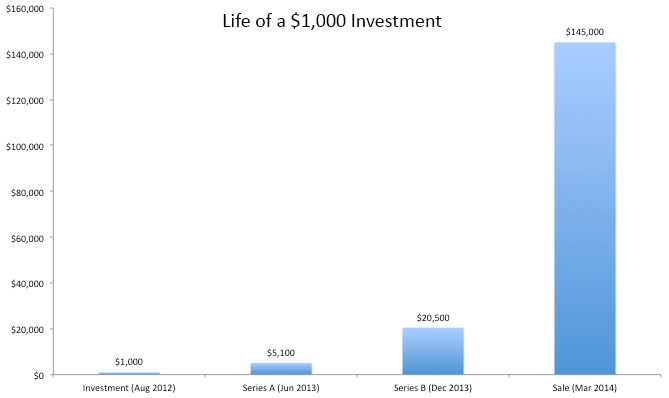 Assume that instead of preorders and donations, Oculus's Kickstarter campaign was for equity and raised a seed round entirely online. It's anyone's guess as to what those terms would look like – Oculus is a sexy hardware company that captures the imagination and it's easy to believe that VR will be a huge industry someday. I'm going to be conservative and assume founder-friendly terms for this hypothetical fundraise: a convertible note with a $15m valuation cap and no discount or interest rate. You can read more about convertible notes here but back-of-the-envelope this is like saying Oculus was worth $12 million with an exciting prototype and promising customer development:

After their crowdfunding campaign they went on to raise a $16M Series A and then a $75M Series B. I don't know what the valuation of those rounds were but as a general rule of thumb startups tend to give away 15-25% in venture rounds. I'm going to assume 15% for both, making their Series A and B pre-money valuation of about $90m and $425m, respectively.

Okay great. So in this universe what would've happened if you invested $1,000 during the crowdfunding campaign?

This sounds pretty small but your investment is worth about $5.1k.

Six months later Oculus raised their Series B diluting your hypothetical stake by 15% to about 0.00482% of the company, but the higher valuation makes your investment worth about $20.5k. Richard Uhlig
CEO and Founder
More than 25 years of business experience focused on the design and development of innovative products across various industries. Former CEO of Morgan Stanley Bank and CIO at Merrill Lynch Bank. Graduate of Cornell University.
We have just commercially launched the world's first saliva test for autism.
We are led by former Chairman & CEO of Morgan Stanley Bank, Rich Uhlig, as well as a seasoned management team and clinical advisory board.
We are developing a robust pipeline of products including tests for Parkinson's disease, concussion, Anorexia Nervosa, and schizophrenia.
Stock @ $266M premoney valuation
Wefunder Inc.
387 startups have raised $137,412,816 on Wefunder
Wefunder supports three different federal laws that allow startups to raise money legally. To comply with the law, Wefunder Advisors LLC and Wefunder Portal LLC (both owned by Wefunder Inc) also list startups depending on the regulation used.
Legal May 16th 2016
Regulation Crowdfunding
Wefunder Portal LLC
$95,680,952
for 301 startups
Legal Now
Regulation D
Wefunder Advisors LLC
$32,676,833
for 102 startups
Rare
Regulation A+
Wefunder Inc
$9,055,032
for 3 startups
Curious how well the companies have done? Or how many raised follow-on financing?
Some fine print:
1) These numbers include startups currently live on Wefunder if they pass their minimum target.
2) Some startups use two different laws at the same time (i.e., Regulation D and Regulation Crowdfunding).